indie godheads Pavement made five albums, But each of them has a shadow album - and it’s usually as strong as the record that actually did come out.

The first is 'The Secret History Vol. 1', collecting the songs that got away during the era of 'Slanted and Enchanted', which Stephen Malkmus, Scott Kannberg and Gary Young recorded on the cheaper-than-cheap in January 1991. the set also collects gems from Peel Sessions  and seven-inchers as well as live monsters from the first European tours, with Mark Ibold and Bob Nastanovich the new boys in the fold. Some of These tracks came out on the 2002 'Slanted and Enchanted' reissue, But have never been separately available as an album in their own right, and many of them have never been on vinyl before. The rarities collected here could have been - or maybe even should have been - a  'Slanted...' sequel. "the songs remain brilliantly elliptical" 4/5 - mojo. 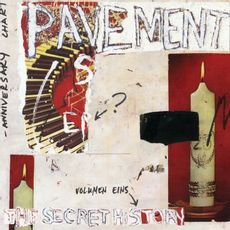