Whoa, yes indeed, THE FLAMIN' GROOVIES carried the untamed spirit of Rock n Roll from their San Francisco psych-jug-band origins, to the protopunk streets of New York and London, to their undisputed throne as Powerpop kings.

So...here are two of their seminal albums (& two of the most seminal albums ever!), caught in the middle of their flawless trajectory, 'FLAMINGO' and 'TEENAGE HEAD', released on Kama Sutra because they wanted to be on the same label as The Lovin' Spoonful, and exuding the same instant legend, pure joy in Rock n Roll vibe as their label-mates...but even more so! The song 'tEENAGE HEAD' itself is one of the founding classics of Punk Rock to be sure, as much as 'Roadrunner' or 'Kick Out The Jams'...and here are a whole bunch more! 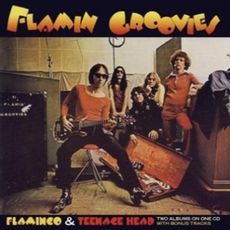