the devotional sufi qawwal musical traditions of the rajasthan express combine with the poetry and compositions of Shye Ben Tzur and guitar work from radiohead's jonny greenwood in this ecstatic double album that is both the subject of and soundtrack to the paul thomas anderson documentary of the same name.

Recorded earlier this year in a makeshift studio inside the 15th-century Mehrangarh Fort in Jodhpur, India, the album was made with Radiohead producer Nigel Godrich, who worked with the ensemble to create this beautiful blend of cultures and styles. It’s a celebration of musicians living, breathing, and learning from one another. 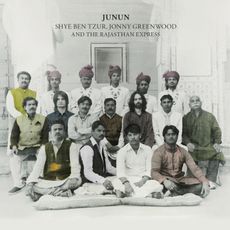