Having ploughed their own unique furrow for over ten years to an ever growing audience, Field Music recently released their fifth album ‘Commontime’ to huge acclaim (incidentally scoring their first Top 40 with it).

· Now seems like a pretty good time to reissue the LP where it all started, with self-titled debut from 2005. · ‘Field Music’ on vinyl has long been out of print, having had only one pressing of 500 on its original release. · At the time, the band listed an array of apposite and conflicting influences (The Left Banke, My Bloody Valentine, Stravinsky, Thelonious Monk, Stax & Atlantic R&B, Big Star, Jimmy Smith, Serge Gainsbourg, The Neptunes and Duke Ellington) but listening back now, you can hear that Field Music’s own distinct sound arrived fully formed. · Record Store Day exclusive heavyweight blue vinyl LP, includes download code. · Limited to 500 copies. 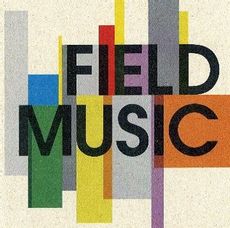