a re-issue of a record frequently considered to rank among the best recordings of Malian music of all time.

This album has been out of print since 2003. It features new artwork & expanded sleeve notes with lyrics in English & French & comes with a 32 page casebound book. on her debut album, Except for electric guitar & bass, the line-up was traditional – kamalengoni or 5-string ‘youth’s harp’, karinyang (iron scraper) & violin (substituting the local one-string fiddle). The music they recorded was exactly the kind of music performed by hunters to charm the wild animals & invoke the protecting spirits, but with updated lyrics reflecting the concerns of young women living in African cities today. with its slow-driving rhythm punched out on the bass strings of the harp & its soaring melodies, The music of 'Wassoulou' sounds as powerful now as it did upon its original release in 1989. 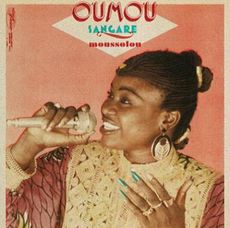