One Day All Of This Won't Matter Any More


British indie folk duo’s 4th album drinks deep from the cup of southern-gothic folk – all the while showcasing the knack for writing poppy hooks & catchy melodies they’ve evolved over the past 10 years.

Producer Matthew E. White, a master of that particular American sub-genre, & the in-house band at Richmond’s Spacebomb Studios provided the consistency & tone the album required. Almost every track was played live in the studio, allowing the long-established session band’s natural chemistry to augment Charles & Rebecca’s. “the most subdued album they’ve ever made … whilst this never seemed like the obvious next step for Slow Club, it’s one they’ve taken with verve and assurance” – 7/10 line of best fit 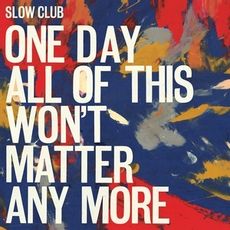