‘requiem’ sounds like the epic small-hours campfire jam after the voodoo freak-out of the night before on Goat’s beatific third album.

The fuzz and tribal rhythms remain, but this time accompanied by joyous flourishes of new textures (acoustic guitars, woodwind, birdsong) coming together to cement the legend of this band by taking us on a journey to fantastical new places. The band call this their ‘folk’ album, but this is still music that transports us to heady, heavy plains. The long running-time allows jams like ‘goatband’ to expand gloriously beyond the horizon, whilst elsewhere the clean, chiming ‘trouble in the streets’ approaches something-like a pop song. As the album continues it seems intent  on delivering on the promise of the krautrock expansiveness hinted at on ‘world music’ and ‘commune’. More to the point, ‘requiem’ goes some way to replicating goat’s famous trance-inducing live shows, and thus have given us their most absorbing and rewarding record so far. 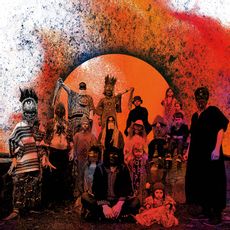