originally slated to be a 7” to follow up their self-titled debut, ‘confusion is sex’ blossomed into the band’s first album: a brain-bludgeoning, completely fried endeavor of dissonance and disarray, a perfect soundtrack for running from a chain-wielding gang near the sin club.

this was the sound of 1983 new york city, nothing like the jangly roots of college radio rock starting to formulate in athens, georgia. it sounded like no one else on earth, for that matter. the raw, wharton tiers 8-track production is dark, the kim gordon- scrawled cover figure art of thurston moore is dark, lee ranaldo’s back cover photo-collage and catherine ceresole’s crumpled-xeroxed images that adorned the inside are dark. it’s an album that moves sonic youth forward from their first ep almost by devolving backwards into true ugly, lo-fi primitivity. 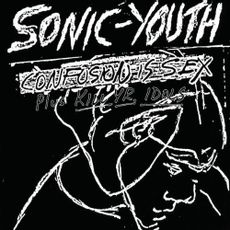