The long-standing Canadian band make the most sophisticated, compositionally advanced, profound, and beautiful instrumental rock music, so as to utterly transcend the very post-rock scene that holds them in such high esteem.

This wonderful suite taps into the by-turns pastoral and triumphant dichotomy that has defined their best moments. It envelops the listener in those tones and senses, the music a thing of graceful ebb and flow rather than the mere peaks and troughs espoused by many a less-gifted contender. Essential for those uninitiated but already into mogwai, explosions in the sky, and mono - or for public service broadcasting fans looking to branch out. “do make say think legitimise post-rock as a term of art” - popmatters, “experimental rock on the grandest and most impressive of scales with not a trace of musical mildew or corrosion." - the wire, “the supernova in constellation’s stellar network... arguably the finest back catalogue of any currently operating instrumental rock band." - drowned in sound 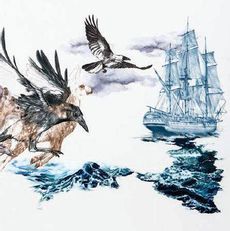