thriving on the dub-laden and spacey fringes of electronic music with heavy, driving bass, these tracks undulate beautifully through the sonosphere.

As a member of the original acid house mafia and a startling talent on both the ones and the twos, he could easily have taken the superstar DJ route, but instead focused on running several mythical underground club nights – Sabresonic, Blood Sugar, Haywire Sessions and most recently A Love From Outer Space. He’s produced plenty of great records, whether for bands (from Primal Scream and One Dove through to Fuck Buttons) or under his own steam (as Sabres of Paradise with Jagz Kooner and Gary Burns, Lords Of Afford with David Hedger, Blood Sugar and Deanne Day with David Harrow, Two Lone Swordsmen with Keith Tenniswood, Asphodells with Timothy J. Fairplay, or solo). 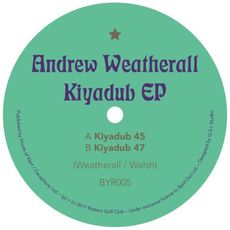