celebrating the 40th anniversary of this, their debut,  which originally came out on 4 November 1977, this pioneering industrial record marked the arrival of one of the most politically and sonically progressive bands of all time.

Throbbing Gristle are Chris Carter, Peter 'Sleazy' Christopherson (who sadly passed away on 25 November 2010), Cosey Fanni Tutti and Genesis Breyer P-Orridge, their impact on music, culture and the arts is immeasurable and still felt today. 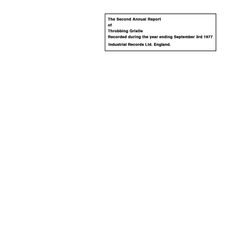