Essential Michigan garage/psych! Propelled by their local chart-topper 'Rainbow Chaser,' Battle Creek quintet The Troyes entered the orbit of bandleader Ray Anthony (“Dragnet”, “Peter Gunn”), laying down a multitude of fuzztone laced tracks throughout 1966-1967 that, save for one 7” release on his Space Records label, remained unreleased on vinyl— until now.

The Troyes exploded onto the music scene with 'Rainbow Chaser'. Sensing a new phenomenon, famed bandleader Ray Anthony signed the group to his new rock label Space Records. His faith in the band was so big that nearly two albums worth of material were recorded at United Sound (Detroit). Unfortunately, only two singles were issued. Far-out psychedelia, unhinged fuzz and farfisa garage, moody haunting sounds, face melters (check out 'Corn Flake')—it's all here. Rare photos, radio surveys, newspaper articles, Troyes memorabilia, and the story of a band that could have been big. “Dare I say, even far better than the oft-lauded, collectible brigade of both reissued and unissued ‘60s LPs. The Bachs? The Dimensions? The Tempos? The Rising Storm? Public Nuisance? Sorry. This Troyes disc trumps them all.” —“Moptop” Mike Markesich, Ugly Things "Had a Troyes LP come out in 1967, it would be well ensconced today as one of the Top 5 best from the era" —Ugly Things 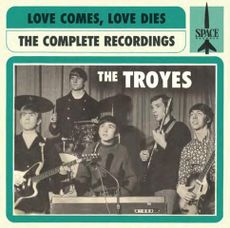