Since forming in 2014 the band have self-released a string of EPs, toured the UK extensively, and played shows across mainland Europe. This March they played their first show in New York for Sofar Sounds. Taking influence from throughout rock and pop history, from Weezer / Dinosaur Jr. to The Cure / The Smiths and more modern influences like Manchester Orchestra, Kevin Devine, and Elliott Smith, the band have slowly developed their sound to where they are now on their first full length, Who Cares Anyway? . Lyrically, the songs deal with navigating life as a young person in the late 2010s and all of the anxiety and uncertainty that comes with it. Using mundane observation and humour as tools for expression, the words serve as catharsis for the band’s main songwriters, Ronan and Sam. Despite a largely American sound the band retain a distinct British sensibility through the vocals and lyrical content. Recorded and produced by long term collaborator Bob Cooper (Citizen, Self Defence Family, Nervus), and mastered by Carl Saff (Dinosaur Jr., Cloakroom, Tiny Moving Parts) over in the USA, this album is the perfect showcase for everything the band has worked towards over the past few years. 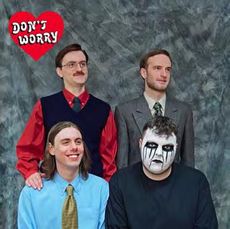