Moscow is mythologized for its grandeur and gravity but its parable pleasures offer splendor and even absurdity.

Over the ten, symmetrical pieces of для FOR, Kate NV scores her native urban environment with just enough whimsy to gurgle through the city cracks and grow psychotropic foliage. Each sound assumes its own personality, moving through the album metropolis like miniature, mutating molecules viewed from NV’s apartment window. Alternately a guitar-wielding, post-punker and one within the multitude of Moscow Scratch Orchestra’s avant-garde, NV is a versatile artist that maneuvers instinctively in whatever musical environs she finds herself. NV’s second solo album is an even more abstract endeavor than the hybrid pop of 2016’s Binasu. Inspired by casual moments of ephemeral sound from within and beyond her apartment walls, the record has a clarity arrived altogether and from right under her nose. Recorded at home, NV says it was as if the music was not written by herself, but her chair. для FOR inhabits a stage that Piero Milesi & Daniel Bacalov, Ann Southam, or Hiroshi Yoshimura may have written music for and dresses it with Viktor Pivovarov’s psychedelic depictions of Moscow – contorting bodies, flying pencils, and multi-dimensional faces dance with subtle arpeggiations, conversational voice synthesis, and anthropomorphic MIDI. Animating objects is essential to the album. Like a surreal still life, each piece is an alien arrangement of common elements that extend the everyday ritual into an eternal landscape of unconscious activity. Somewhere along that landscape, Kate awaits and greets with apples for hands and fish for feet. Like the album title, each composition contained within is represented as a three letter word, in Russian and English. The first half of для FOR was written in the spring. Starting with “YXO EAR,” previously released on the Peaceful Protest compilation cassette in 2017, melodies meander and lollygag. “двA TWO” incorporates human breath played like notes on a pump organ. “дуб OAK” offers a warm tune to tango. “как HOW” loops curious notes that bump into each other with a chirpy acknowledgement. “вас YOU,” the only track on для FOR with lyrics, sets a Wassily Kadinsky poem to song. The second half of the album was written in the autumn. The feathery edges of “раз ONE” extend like watercolors bleeding off a rubber scroll. “зря SEE” is a subdued, shadowy variation of “как HOW”, as if the same song were played in different weather, dimmer light, or by Kate’s devious doppelganger. The electronics unravel and unwind on “пес DOG” until the final track, “кто WHO,” ends with vague solemnity and rattled metals. 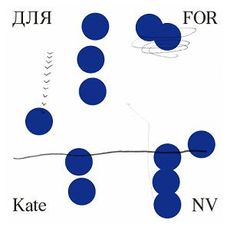