A fired-up, explosive and furious record – Cherry Glazerr’s fourth record sees them take equal aim at modern patriarchy, as well as the current incumbent in the White House – it is the heady mix of intoxicating pop gloss lying on top of searing, ripping 100 miles per hour punk-tinged guitar riffs that make it an unmissable blast of righteous fury.

After releasing 2016’s critically acclaimed Apocalipstick, Cherry Glazerr spent the next 18 months touring the world on their own steam. Touring almost non-stop, with some of the world’s best and most beloved bands, they only really stopped to work on their follow up, Stuffed & Ready. While furiously building the band’s sound and ideas, front person Clem Creevy enlisted Carlos de La Garza to be the band’s studio co-collaborator as they evolved the songs and refined the recordings. "her melodies take unexpected, angular leaps, while her guitar parts underline her solitude or blast it away." 8/10 - new york times 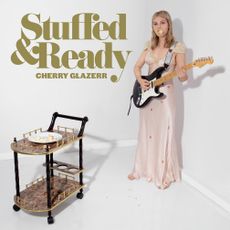