To describe the last two years as a whirlwind for BRUTUS is something of an understatement.

Having signed to Hassle Records, 2017 saw the release of their debut album, Burst, which set them on a path of, award nominations and ‘album of the year’ accolades. Having toured with Sargent House label mates Chelsea Wolfe and Russian Circles, BRUTUS also hit the road as main support to Thrice through Europe. Taking time out from the live circuit, the trio headed to Vancouver to record their second album, once again returning to Jesse Gander (Japandroids, White Lung, Baptists) at his Rain City Recordings studio in September 2018. The resulting 11 tracks form BRUTUS’s new album, Nest. By their own admission, the formative sound of the band was shaped by their physical limitations; drummer Stefanie Mannaerts adopted vocal duties initially out of necessity. Having fully embraced her role as both vocalist and drummer, the full range of Stefanie’s multiple talents is showcased on Nest. The abrasive urgency of her emotive vocals is mirrored in the tribalistic drumming, just as tender whispers echo the gentle roll of percussion elsewhere. Co-conspirators Stijn Vanhoegaerden (guitar) and Peter Mulders (bass) complete the magic circle with pervasive riffs, dynamic bass lines, and a fine balance between uneasy restraint and unrepentant aggression. BRUTUS throws a net over post-rock, hardcore, metal and pop, gathering defining facets of each into their unique sound. The path BRUTUS has taken has been meticulously mapped out on Nest. All those glorious highs and euphoric moments are present - highlighted in magnificent technicolour no less. Burrowed in amongst those triumphs are moments of reflection; the choices they have made in pursuit of their goals and the impact those choices have had on both themselves and those they have left behind in their nest. The arc of the album charts the friction between the band’s forward motion and their desire to maintain a connection to those back at home. It’s timeline of invincibility and doubt, of taking risks and letting go; a chronology of what they are and what they’ve done. Bound by a thread that was intangible to others, their shared experiences, both good and bad; Nest is the sound of a band who know how to use the strength of their bond to full effect, to use every part of themselves as an additional tool for conveying their message: take care of those in your own nest. BRUTUS find their places of comfort to be very different to the ones previously held dear; the nest they started out with is not quite the same one as they stand in today 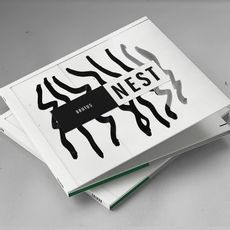