Compiled from the original analogue master tapes and remastered by John Webber at AIR Studios, this release comprises the theme and dynamic incidental scores for Randall and Hopkirk (Deceased), containing over 200 pieces of music which were especially composed for the series.

Edwin Astley's whimsical score captures the adventures experienced by the pair of down-at-heel detectives with a difference - one of them is a ghost! Includes liner notes by archive television historian Andrew Pixley. 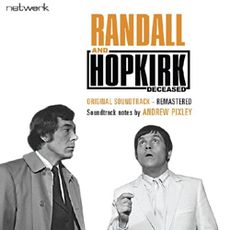