She Paints Words In Red is the second album House of Love recorded after their reunion in 2003.

The melodic pop group recorded some softer songs, which represent how they developed through the years. They recorded the album during a 10-day session with long-time producer Pat Collier. He allowed the band to capture the chemistry they had when they first started in the old days. They’re blending the folk rock together with their dreampop melodies. Altogether it’s a great return of a never forgotten band. 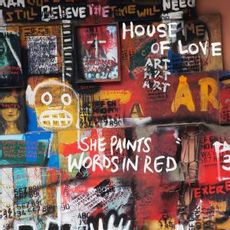