Stations of the Crass is the second album by Crass, released in 1979.

The record, originally released as a double 12", includes live tracks from a gig recorded at the Pied Bull pub in Islington, London, on August 7, 1979. The first three sides contain the studio tracks and play at 45 rpm, while the final side comprises the live material and plays at 33 rpm. The album's title is not only a pun on the Catholic rite of the Stations of the Cross (such jibes against the religious establishment were typical of Crass), but is also a reference to the graffiti campaign that the band had been conducting around London's underground railway system, the cover artwork depicting a wall at Bond Street tube station that had allegedly been 'decorated' by them. Although the album met mixed critical reception at first, it managed to sell at least 20,000 copies within two weeks. Album has been remastered by Alex Gordon at Abbey Road Studios, as close as possible to the sound of the original release. “As it was in the beginning”. The re-pressing retains the original folding out poster sleeve design and comes with a download card. 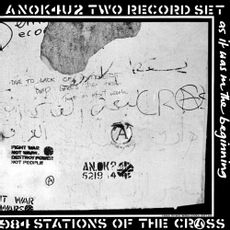