supremely catchy licks flourish all over this immaculately produced fifth album from danny brown, who sounds nothing short of masterful behind the mic.

danny set the blueprint for many of today’s critical darlings and opened doors for so many following his personally audacious start with ‘xxx’. Executive production is from the iconic rapper and producer Q-Tip of A Tribe Called Quest, marking the first time he’s executively produced an album since Mobb Deep’s ‘The Infamous’. Brown’s lyrics balance earnest storytelling with laugh-out-loud one-liners, especially apparent on “Dirty Laundry” as Danny raps about his sexual exploits and reminisces on his rocky path to stardom. “On his fifth album, executive-produced by Q-Tip, Danny Brown ascends to a sort of hip-hop classicist nirvana and remains one of the most inventive and dimensional rappers working today.” 8.1 – pitchfork. 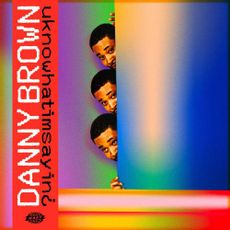