The Twilight Sad’s ‘Òran Mór Session’: a collection of reworked, stripped-back versions of tracks from the album, B-sides and a cover of Arthur Russell’s ‘I Couldn’t Say It To Your Face’.

Now repressed on white vinyl.  Recorded upstairs at Glasgow’s Òran Mór, a popular arts and entertainment spot in the west of the city, we see the skeletons of the songs that comprised the bulk of ‘Nobody Wants to be Here and Nobody Wants to Leave’ presented as they were initially composed: stark, unadorned and with their melodies laid open and their meanings made clear; a chance to hear another side to the band’s repertoire but also to revisit what made the originals so special in the first place.  Band currently on tour.  “It’s not until you assemble - no, grow, because this is nothing if not organic - the whole thing, that the jaw-dropping brilliance of the album reveals itself.” - Drowned in Sound (10/10)  “Simple but effective, the lyrics are bleak, bitter phrases of existential loneliness and torment. His emotion hits just as potently throughout.” - NME (8/10) 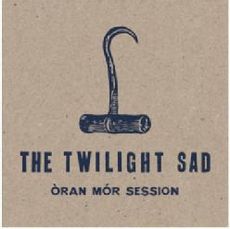