The indie disco classic - finally back on vinyl! We Are Scientists reissue their 2005 album With Love and Squalor on the occasion of its 50th anniversary.

Includes the hit singles Nobody Move, Nobody Get Hurt, The Great Escape and It’s A Hit. “A long time ago our management came to us and suggested we reissue With Love and Squalor on the 14th anniversary of its release, which we thought was pretty dumb. ‘Come back to us on a real anniversary,’ we told them. Fast-forward to a couple weeks ago, when they told us big 50 was coming up. I’d say that’s worth celebrating.” - Keith "Fans have been asking us to reissue With Love and Squalor on vinyl ever since the last printing, in 2006, ran out. The fact that it took fifty fucking years to make this happen still blows my mind,” says Chris, to which Keith adds, "It’s a testament to the glacial pace of things at major labels. Definitely helps explain some of their financial trouble.” 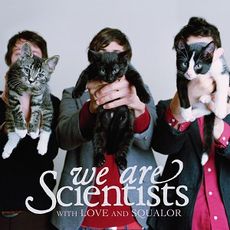