PUT THE SHINE ON

‘Put The Shine On’ is a record that luxuriates in extremes, balancing some of the most pristine and adroit pop songs the band has ever crafted, while simultaneously exploring the most extreme states of human feeling and being—the result being an album that is both pristine and, at times, harrowing. FFO: Anohni, Devendra Banhart, Self Esteem “this album is expectedly feisty, but what else would you expect from this sibling duo?!” – The Fountain 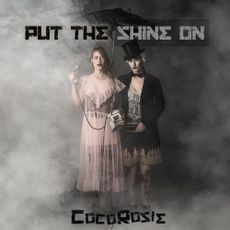