The distribution of the album was disorderly, with some fans pre-ordering the album on his website up to a year before it was shipped. Later in the year came the Newpower Soul album, credited to NPG but in reality a de facto Prince album, his name being an unpronounceable symbol at the time, and announced as such by the press release that pre-dated the record’s release. It was while promoting New Power Soul that Prince and his entourage performed at Tivoli in Utrecht, the Netherlands playing a show which was recorded for live FM radio Broadcast. In true Prince style, however, not a single cut from the new record was featured as the band ploughed through a fascinating and dynamic set of cover versions, old Larry Graham numbers (from his Graham Central Station days) a clutch of Prince classics and a couple of songs he’d previously donated to others. The show was deemed notorious however, and indeed was featured sometime later on the cover of UK tabloid The Daily Express, as for the final track, Prince ad-libed over an old Chuck Brown cut called ‘Bustin’ Loose’, providing new lyrics which referred to Osama Bin Laden bombing America in 2001 - performed 3 years before the 9/11 attacks on New York. 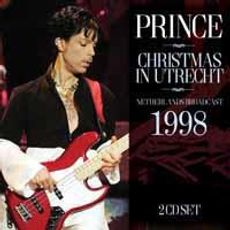