Clocking in at a whopping 65 minutes — prime CD era in 1997 — and originally released through Peaceville Records, Tumuli Shroomaroom is a legitimate heavy rock classic.

Its production was clearer, its purpose was clearer and it took the blow-the-doors-down promise shown throughout first album Hymns to the Stone and brought it to a point of full realization throughout extended pieces like “Motherslug (The Mother of All Slugs),” “Heavy Feather” and “Firedance,” not to mention the nine-minute opener, “Hymns to the Stone,” a title-track for the release before. Go figure. By ’97, Acrimony‘s sense of world-creation was becoming clearer, and their songs — not all of them, but definitely some — had started telling a story beyond the riffs and nods. Of course, Tumuli Shroomaroom had and still has plenty of that too in “Million Year Summer,” “Vy,” “Find the Path” and “The Bud Song” — the arguable “meat” of the album in its post-opener beginning and the middle of the nine-song tracklist — but even amid “The Bud Song”‘s ultra-stoner janga-janga shuffle there’s psychedelic flourish building on that shown at the outset of the song, and Acrimony‘s adventurous sensibility never really dissipates. It’s just presented in dynamic fashion, and they use it to various ends throughout. 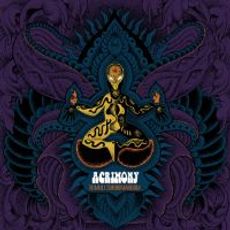