It's impossible to overstate the enduring impact of 1988's 'Straight Outta Compton'; as polarizing as its outlook may be, it remains an essential landmark, one of hip-hop's all-time greatest.

there's little social criticism or reflection on the gangsta lifestyle; most of the record is about raising hell -- harassing women, driving drunk, shooting it out with cops & partygoers. All of that directionless rebellion & rage produces some of the most frightening, visceral moments in all of rap. Given the album's sheer force, the production is surprisingly spare, even a little low-budget - mostly DJ scratches & a drum machine, plus a few sampled horn blasts & bits of funk guitar. it still sounds refreshingly uncalculated because of its irreverent, gonzo sense of humour, still unfortunately rare in hardcore rap. 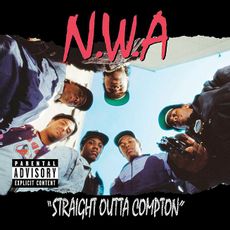