liam finally joins the mtv unplugged hall of fame with this career-spanning thriller of stripped back crowd pleasers.

Material from Liam’s solo career such as his personal favourite ‘Once’ and the joyous ‘Now That I’ve Found You’ resonates in this stripped-back format, with his vocal shining alongside a trio of backing singers and string arrangements performed by the 24-piece Urban Soul Orchestra. Oasis guitarist Bonehead features on performances of ‘Some Might Say’, ‘Stand By Me’, ‘Cast No Shadow’ and Liam’s first ever live vocal performance of the ‘Definitely Maybe’ bonus track ‘Sad Song’. The show concludes on a crowd-pleasing high with an emotive take on the classic ‘Champagne Supernova’. Stripped of the force of the studio recording, the album's new version of ‘Gone’ reveals new-found bombastic dynamics and an evocative cinematic atmosphere. 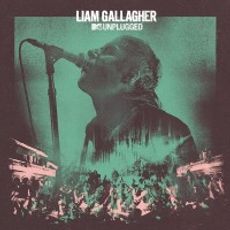