Dennis Alcapone initially inspired by DJ U Roy, was soon to challenge his crown in the early part of the 70’s releasing over 100 hit tunes.

He could weave his vocal magic over any tune / rhythm that came his way and take it to another place. Dennis Alcapone (b. Dennis Smith, 6 August 1947, Clarendon, Jamaica) began Dj-ing for the El Paso Hi–Fi Sound System around 1969.His first releases resulted from working with producer Keith Hudson, a succession of hits followed, ‘Shades Or Hudson’, ’Spanish Omega’, ‘Revelation Version’, ‘Maca Version’ and ‘The Sky’s The Limit’ all hit in 1970 alone. Dennis moved camp to work with producer Duke Reid reworking some fresh ideas over classic Treasure Isle rhythms. ’Number One Station’, ‘Mosquito One’, in 1971 and ‘Rock To The Beat’, ’Love Is A Gamble’, ‘Wake Up Jamaica’, ‘Teach The Children’ and ‘Musical Alphabet’ in 1972.Dennis moved on to work with all the top producers through this period between 1970 – 1973, producers Coxonne Dodd, Lee Perry, Sir JJ, Winston Riley, Joe Gibbs, Prince Buster all provided an outlet for his musical endeavours. Another great relationship was his work for producer Bunny Lee, again scoring some big hits including, ‘Guns Don’t Argue’ and ‘Ripe Cherry’ the later adding a twist to Bunny’s massive hit of the time ‘Cherry Oh Baby’. We have looked to this period in Dennis’s career where there is a wealth of great music. ‘Go Deh’ (Leroy Smarts ‘How Long’), ‘Eternal Life’ (Johnny Clarke’s version of Peter Tosh’s ‘Legalise It’) Steve Austin (The Six Million Dollar Man tale over Leroy Smart’s ‘Pride and Ambition’), Wise Man From The East (Johnny Clarke’s ‘You Have Caught Me Baby’), It Must Come (Delroy Wilson’s ‘Better Must Come’) Blessed Are The Meek (Slim Smith’s ‘Blessed Are The Meek’) to name but a few. Dennis left Jamaica in 1973 just after being awarded the Cup for Best DJ in Jamaica by Swing magazine. With his signature shout of Yeah Yeah Yeah !... you knew he was going to Mash Up The Dance wherever his musical talents led him. Hope you enjoy this set of hits and lost classics. 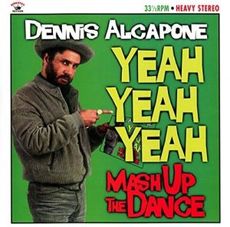