A new take on a classic reggae sound.

The change in music production technology in the 1980s opened doors to new sounds and experiments from producers around the world. In Jamaica, producers who built their name on the live studio sound with a drum and bass foundation either adopted to syndrums or full digital drums by the mid-80s, or they dropped out of the game. Producer and melodica player Augustus Pablo was a prolific survivor from the classic reggae era, and he released four new studio albums through Greensleeves between 1986 and 1990, the critical years when the new sound of reggae was finding its feet. Collected together here as Ancient Harmonies on a 2CD, 6-panel digipack with 12-page book are the four LPs, Rising Sun, Rockers Comes East, One Step Dub, and Blowing With The Wind. Recorded at Channel One, Tuff Gong, Dynamic, HC&F & Creative Sound with engineers including Scientist, Soldgie, Phillip Smart & Steven Stanley, the hardcore steppers and nyabinghi meditations were keenly embraced by the new age sound system culture in Europe, and Pablo backed the releases with hugely successful tours of Europe and Japan showcasing many of the tunes a selection of his original rockers. 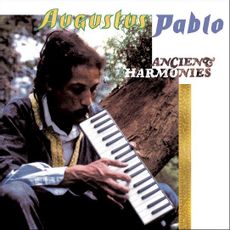