A landmark in Field Music’s long and varied history, it marked their return from a self-imposed hiatus with a gloriously rich LP that entwined the brother's love of the rock music cannon with a rediscovery of some of pop's overlooked adventurers.

Themes disappear and reappear. Some songs flow together, others intrude on each other. There are contradictions and ripostes. There appears to be a great deal of defiance and a fair amount of resignation. Can it make sense? Does it matter if there is no sense? What strands can hold together the dissonant funk of 'Let's Write A Book' (a call to arms for the perpetually apologetic), the mutated blues of 'Each Time Is A New Time' (a riposte to misplaced faith in repetition), the chopping and splashing pop driven through 'Them That Do Nothing' (perhaps about a valiant willingness to make mistakes), the multilayered riffery of 'The Rest Is Noise' or the epic found-sound song cycle that starts with 'See You Later'? Perhaps, then, the central strand of this sprawling Tusk meets The English Settlement epic is simply that this is the album when the Brewis brothers truly became Field Music. Even on a record as varied as this their sound and approach can still be identified as their own. As David said at the time: "In the past we might not have had faith that it was sufficient just to be us. But now I think we do." “Field Music’s most bounteous harvest yet” – Mojo. “A work of incredible beauty and complexity” - The Sunday Times. “The brothers Brewis reconvene to make a modern gem” - Uncut. "A superbly off kilter record from Sunderland’s Sparks” – Q. 500 only 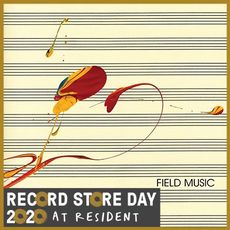