Ride The Fire’ is the fifth album from Icelandic quintet MAMMÚT.

The album is the band’s second release in English and was recorded between London and their hometown of Reykjavík. ‘Ride The Fire’ was produced by fellow Icelander Árni Hjörvar of The Vaccines – a close friend of the band, and another reinforcement for their close-knit group. It was then mixed by Sam Slater, who produced the ‘Joker’ and ‘Chernobyl’ scores with Oscar-winner Hildur Guðnadóttir, and mastered by Mandy Parnell, who has worked with fellow Icelandic luminaries Björk and Sigur Rós. ‘Ride The Fire’ is the first release since the band's 2017 album ‘Kinder Versions’ which was nominated for six Icelandic Music Awards, of which the group took home three. Mogensen and guitarists Alexandra Baldursdóttir and Arnar Pétursson formed the first incarnation of MAMMÚT as teenagers in 2003, with bassist Dýradóttir joining later. ‘Ride The Fire’ sees the newest member of MAMMÚT made official: drummer Valgeir Skorri Vernharðsson, whose expressive, expansive style is a perfect match for the album’s searching spirit. ‘Ride The Fire’ represents a sonic and philosophical shift for MAMMÚT, and a number of firsts for the band. Recorded in Iceland and London in August and September 2019, it is the first album they have made between two countries. The sessions also saw a new approach to writing and recording, with parts of songs being worked on by band members separately rather than together, garage-band style. But this new approach didn’t create distance between the five-piece – it reinforced the trust between them. They learned to be less precious with parts they had written, improvising around them and trusting their bandmates’ changes and interpretations. “There was a mutual respect, and a trust in the journey,” says Dýradóttir. “No ideas were unwelcome. It was like research. We have grown to know ourselves more as a collective.” Each song on ‘Ride The Fire’ is rich with imagery, and the band have picked out its ‘characters’ in retrospect, to form a visual accompaniment to the album – a way of structuring what they have made to navigate through the uncertainty. They liken this building of personal mythology to religion, but also stress its core playfulness – an important theme of the album. “Astrology and religion are a way of grownups playing and building imagery,” says Dýradóttir. “We were thinking about sorcery and spells, and creating our own stories. We were playing.” The ten tracks on ‘Ride The Fire’ represent a suite of starting points, prompts, spells – an invitation to join the band on a non-hierarchical journey into the unknown. 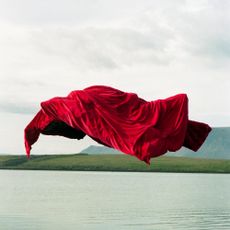