It is a mix that has mesmerized critics, musicians, and fans for decades. ‘The Tenement Year’ is the sixth studio album by American rock band Pere Ubu, their first album after reuniting following their 1982 break-up. The album chronicles another crucial era for the band, an escapade that retooled our understanding of what pop music is and moves away from the abstract sounds of their earlier releases. Here the band consisted of core members David Thomas, on vocals, trombone and melodeon; Allen Ravenstine on EML synthesisers and sax; Tony Maimone on bass and Scott Krauss on drums. They were joined by Jim Jones on guitar and Henry Cow drummer Chris 'Cutlery' Cutler on second drum kit. Quotes “A classic” - NME (Edwin Pouncey - 1988) “Astonishing” - Village Voice (Robert Christgau - 1988) “It's still a band that blithely upends all that's solid and foursquare about rock.” - New York Times (Jon Pareles - 1988 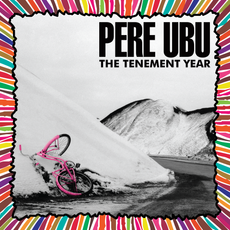