Craig Charles has been a soul & funk fan since his teenage years in Liverpool, going to see local heroes The Real Thing live, and wearing out his shoe leather dancing in the city’s many underground clubs.

Craig has been sharing that passion for the music via his 6Music and BBC Radio 2 shows and DJ nights for nearly 20 years. His brand new ‘Trunk Of Funk’ compilation series, blends up-tempo club classics, with fresh music from the cream of the crop from the contemporary soul and funk scene, and will be Craigs very first vinyl release – a beautiful, double vinyl gatefold LP and he’s certainly excited about it, stating; “I can’t wait to bring you big beats, bass lines and booga-bloomin-loo! Presenting The Craig Charles Trunk Of Funk Volume 1 as my first ever vinyl release has put a proper wiggle in my walk!” This collection of 21st century disco, soul, funk & afro grooves from includes tracks from contemporary heroes of the scene such as Monophonics, Amp Fiddler and The James Taylor Quartet, it’s also peppered with some old school classics and rare grooves from legends such as Roy Ayers, PP Arnold, Miriam Makeba and Patrice Rushen. Craig has personally selected and sequenced this collection to take the listener of a musical journey, the closest thing to having Craig visit and personally DJ for you in the comfort of your own home! It also includes two ‘Trunk Of Funk Edits’ that are 100% exclusive to this compilation and not available anywhere else. Craig Charles is an actor, poet, radio & TV presenter – his BBC6Music ‘Funk & Soul Show’ launched in 2002 and is one of the stations most popular & long running programmes. Includes two ‘Trunk Of Funk Edits’ that are 100% exclusive to this compilation. The 8th compilation album of Craigs long career – but his very first to have a full vinyl release– a deluxe 2LP gatefold sleeve version with Craigs’ own sleeve notes. 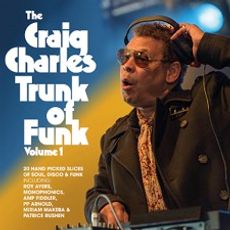