Jetstream Pony come from a love of schrammelig indie-pop and post-punk, and are based in Brighton and Croydon, UK.

The band features Beth Arzy (The Luxembourg Signal, Trembling Blue Stars, Aberdeen, The Fireworks, Lightning in a Twilight Hour) on vocals, Shaun Charman (The Wedding Present, The Popguns, The Fireworks) on guitar and Kerry Boettcher (Turbocat) on bass, with Hannes Mueller (The BV's, Endlich Bluete) on drums for live shows. Beth and Shaun met as members of The Fireworks, recording rough demos on an iPad, which were picked up by German record label Kleine Untergrund Schallplatten, who released them as a 7" single, insisting that the versions used were the original demos. 'Like You Less/Had Enough' was released late 2017 to enthusiastic reviews and radio play around the world, including BBC6 Music. By now a full band had formed, with Kerry on bass. A 12" EP then followed, titled 'Self-Destruct Reality' in September 2018 and a 7" single 'I Close My Eye' followed in December 2019, with their self titled debut studio album being released in May 2020 (first issue). Jetstream Pony have gigged around the UK and Germany, including a well received week long UK support to Shaun's previous band The Wedding Present. Following a first issue sell-out only months ago, released via Shelflife (USA) and Kleine Untergrund Schallplatten (Germany), we're very pleased to provide a reissue of the debut long player, this time adding track 'It'll Take More Than A Friday' to the listing, with a limited run of 250 on splatter vinyl. Fact - Jetstream Pony is a lovely ex-racing greyhound, also known as Jenna 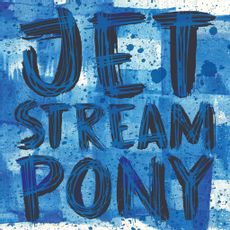