To coincide with its 20th anniversary, Clint Mansell's haunting score to Darren Aronofsky's 2000 film, Requiem for a Dream, performed by Kronos Quartet, returns to vinyl.

This was Mansell’s second of several collaborations with Aronofsky, following 1997’s π, and features arrangements by David Lang of Bang on a Can. The film stars Academy Award-winner Ellen Burstyn, Jared Leto, Jennifer Connelly and Marlon Wayans, and was adapted from the 1978 novel by Hubert Selby, Jr. (Last Exit to Brooklyn), who also wrote the screenplay with Aronofsky. Set on the rusted mean streets of Coney Island, Brooklyn, Requiem for a Dream tells the parallel stories of four people pursuing their dreams of better lives. The reissue features the original soundtrack, plus two bonus tracks. Clint Mansell, a musician, composer, and founding member of the band Pop Will Eat Itself, first worked with Darren Aronofsky on the score for his 1998 film π. Also released by Nonesuch are Mansell’s scores for Aronofsky's The Fountain (2006), nominated for a Golden Globe, and Noah (2014). His other scores include The Wrestler (2008), Moon (2009), Black Swan (2010), Filth (2013), Stoker (2013), High Rise (2016), for which he received an Ivor Novello nomination, and Loving Vincent (2017). For more than 40 years, San Francisco’s Kronos Quartet – David Harrington (violin), John Sherba (violin), Hank Dutt (viola), and Sunny Yang (cello) – has combined a spirit of fearless exploration with a commitment to continually re-imagining the string quartet experience. In the process, Kronos has become one of the world’s most celebrated and influential ensembles, performing thousands of concerts, releasing more than 50 recordings, collaborating with many of the world’s most eclectic composers and performers, and commissioning over 850 works and arrangements for string quartet. A Grammy winner, Kronos is also the only recipient of both the Polar Music Prize and the Avery Fisher Prize. Most recently, in 2019, Nonesuch released Kronos’s ground-breaking collaboration with composer Terry Riley, Sun Rings, and, in 2017, Folk Songs, featuring Sam Amidon, Olivia Chaney, Rhiannon Giddens and Natalie Merchant.

Dan says "An amazing soundtrack for an amazing film. The Kronos Quartet match the intensity of the film with their incredible score. Watch the Film, and you'll see what I mean. Essential!!!" 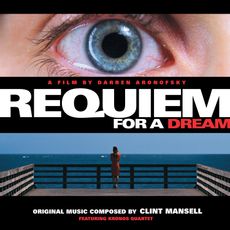