Where Does A Body End?


SWANS has always been a collec on of singular performers, but there’s been one constant since its forma on in 1982 - singer and songwriter Michael Gira.

With unfe ered access to hundreds of hours of Gira/SWANS archives of never-seen-before recordings, videos and photographs, the lm brings us along the path they needed to carve for themselves. ‘Where Does A Body End?’ is an in mate portrait of the band SWANS, from their roots as a brutal, confronta onal post-punk band that emerged from the same early 1980s era NYC that gave us Sonic Youth (and, somehow, Madonna) through their ill-fated bid at mainstream success in the 90s indie rock gold rush, through breakups and chaos (on and o stage) to their odds-defying current status as one of the most accomplished and ambi ous bands in the world, one whose concerts are more like ecsta c rituals than nostalgic trips back through their most popular songs. The lm is many things, a musical history, a me capsule, a tour diary, a concert lm, but mostly it’s the story of a life in the arts, frequently di cult, spanning decades without a safety net, crea ng the work because Gira says, “What else am I going to do?” As band mate Thor Harris notes, “Michael is not a fearless person, but he is a fearless ar st.” 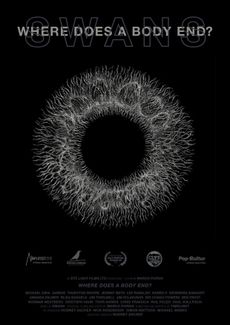