Always In My Head


“One of the UK’s freshest new bands…with an emphasis on emotional and political turmoil, APRE’s sound engages with the wider issues surrounding us all” Wonderland “Unapologetically huge.

..melds Tears for Fears and Foals to stirring effect" Sunday Times "APRE are one of the most exciting bands in the alt-pop sphere" DORK "Frighteningly composed and confident for a band's first steps" DIY "Rich, perfectly produced…shrewd observational narratives." CLASH 'Without Your Love' is the brilliant breakout single from APRE, available now on Polydor Records. It acts as the second preview of the London band's mini-album project, 'Always In My Head', which will follow on November 6th and was introduced recently by their escapist single, 'Live It Up'. An extensive touring schedule for APRE is additionally being rerouted for 2021, with the band having sold out the Scala earlier this year, played a headline tour around the UK, and also gone on the road with the likes of Sam Fender, Lany, Friendly Fires and Inhaler. 'Without Your Love' is an epic but intimate cut of alternative pop from APRE, as inspired by a lifelong love of 80s icons like The Police with the idea of placing modern relationships under the microscope: a topic that has become even more pertinent to them whilst apart, and a dilemma that Charlie and Jules neatly summarise as ‘"I want to be with this person, but it’s not allowing me to feel myself, and pursue the life I want to lead. It’s kinder sometimes to say goodbye to someone who’s had such a positive impact on your life beforehand, if in the long term it’s better for you both. 'Without Your Love' is about the idea that you shouldn't force yourself to make the relationship work - appreciate what it’s done for you, and keep moving forward in your life." APRE are one of the UK's most astute, fiercely creative new bands. Their innately massive-sounding songs derive from a more introspective, outsiderstatus: finding few creative opportunities in their respectively-suburban upbringings, it was the unlikely confinement of a West London chess club where APRE formed, and first found their own outlet for escapism. And it's the harsh reality of the outside world that the band have frequently spun on its head over their projects to date. Whether addressing the turbulent political climate ('Guns Down' EP), the more isolating aspects of technology ('Everyone's Commute EP'), it all comes together on their debut mini-album, 'Always In My Head'; introduced recently by the seemingly euphoric 'Live It Up' (which actually describes "being pushed down by social pressures, and never feeling like you are good enough"). On 'Always In My Head,' APRE refine their eclectic, experimental sound into songs which are as universal and uplifting as they are emotionally open. A band who have always written, recorded, and produced everything DIY on 'Without Your Love', watch APRE truly come into their own. 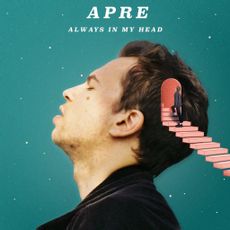