Milan Records is pleased to release this stunning vinyl edition of EVANGELION FINALLY, a col-lection of vocal songs performed by Yoko Takahashi and Megumi Hayashibara as heard in the hit anime series NEON GENESIS EVANGELION and EVANGELION 2.

0 YOU CAN (NOT) ADVANCE The critically acclaimed anime series has since become a global cultural phenomenon with fans across the world gearing up for the Shin Evangelion film release in 2021 The vinyl release in February 2021, celebrates both the Shin Evangelion film release and Anime Month The 15-track collection includes Yoko Takahashi’s well-known opening song to the series “The Cruel Angel’s Thesis,” as well as new covers of original songs including “FLY ME TO THE MOON (2020 Version),” a new recording of the classic jazz standard featured in the show’s end credit, and a new vocal arrangement from Takahashi of “Kokoro yo Genshi ni Modore 2020.”  Also included in the collection is “THANATOS -IF I CAN’T BE YOURS-,“ a new original track and the theme song to the Shin Evangelion feature film performed by LOREN & MASH. Mean-while “Come sweet death, second impact” is a jazz arrangement of the legendary master-piece featuring the voice of Megumi Hayashibara. Included in the CD version of the release is a booklet featuring exclusive interviews with both Yoko Takahashi and Megumi Hayashibara 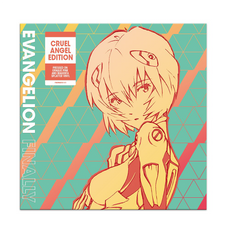