The title refers to the five-day span during which the album was recorded. An almost entirely acoustic recording, the album features original songs and covers of traditional folk songs in near equal number, and was produced by R.E.M. guitarist Peter Buck. With Uncle Tupelo’s popularity on the rise, March 16-20, 1992 sold more copies than their first two albums, No Depression and Still Feel Gone, did combined. The album generated positive reviews. Jason Ankeny of Allmusic called the album “a brilliant resurrection of a bygone era of American folk artistry”. Bill Wyman of Entertainment Weekly remarked that it was “a moving and sincere New Depression manifesto”. 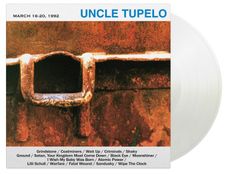