She Walks In Beauty


Drawing deep on the poetry of Shelley, Keats, Byron, Wordsworth, Tennyson and Thomas Hood, Faithfull’s vocal performances - set to Ellis’ subtle collages of sound - draw out the heart in all these great poems, renewing them with the complex, lived-in timbres of her voice, and set to a subtle palette of ambient musical settings.

it's A unique new album of poetry and music featuring Marianne Faithfull set to the music of Warren Ellis, and featuring Nick Cave, Brian Eno and Vincent Ségal.

With She Walks in Beauty, Marianne Faithfull with composer and multi-instrumentalist Warren Ellis releases one of the most distinctive and singular albums of her long, extraordinary life and career. It was recorded just before and during the first Covid-19 lockdown – during which the singer herself became infected and almost died of the disease – with musical friends and family including not only composer Warren Ellis but Nick Cave, Brian Eno, cellist Vincent Ségal and producer-engineer Head. She Walks in Beauty fulfils Faithfull’s long-held ambition to record an album of poetry with music. It’s a record that draws on her passion for the English Romantic poets, a passion she fostered in her A Level studies with one Mrs Simpson at St Joseph's Convent School in Reading. From there she entered the world of As Tears Go By, of Mick Jagger and the Rolling Stones, Top of the Pops and the left-hand path of pop and stage stardom. Sixties iconography and outrage followed, as did her subsequent battles with addiction before her 1979 return to powerful female and artistic autonomy with Broken English, an album which featured her setting to music Heathcote Williams’ poem of eviscerating rage, Why D’Ya Do It? It’s both a radical departure and a return to her original inspirations as an artist and performer. The greatest poetry is best heard, and Faithfull’s accounts of some of the greatest lyric poetry in our language – Keats’ Ode To A Nightingale and Ode To Autumn – are spine-tingling in their deep understanding of the poetry’s powerful currents of meaning and identification. On Nightingale, her voice opens up like an epic landscape, while in Shelley’s miniature masterpiece, To The Moon, she sounds otherworldly, as if calling down from another medium, and the atonal, otherworldly sound textures provided by Eno on Bridge of Sighs and La Belle Dame Sans Merci become a compelling foil for Faithfull’s haunting interpretations of these rich, dark poems. “They’ve have been with her her whole life,” says Ellis. “She believes in these texts. That world, she inhabits it, embodies it, and that really comes through. There’s just something about the way she can deliver that is incredibly affecting.” “Eventually I always end up where I was meant to be,” says Faithfull. “I’ve noticed that. It may take a long time, but I get there. I never forget these things. After all these years, I’ve drawn the strands back and they still mean something and they resonate more, actually, because I now have life experience. Life and near-death experience. Many times! Not just once.” She Walks in Beauty is scheduled for release April 30th, with artwork created for the album by British artist and lifelong friend, Colin Self, and with the full texts of the poems, and commentary, included in the liner notes. While Faithfull continues to recover from the after-effects of Covid-19, and the world around us continues to struggle with the impact of the worldwide pandemic, these are poems and performances to steady and lift the spirit. 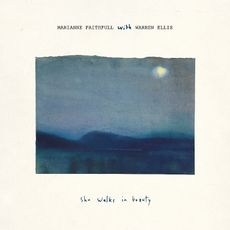