Fakebook is the fourth studio album by American indie rock band Yo La Tengo, released in 1990 by record label Bar None.

A collection of mainly cover songs that lean toward the idiosyncratic (e.g., Peter Stampfel, Daniel Johnston, Jad Fair), Fakebook is warm, low-key, and lovely, with heartfelt singing and playing that never flags after hundreds of replays. It's impossible to imagine playing this record and not smiling and singing along. A big bonus is a great version of the Flamin' Groovies' "You Tore Me Down." When Yo La Tengo released Fakebook, their fourth full-length, the band was only a twosome, as future YLT bassist James McNew was presumably still playing in various bands and moonlighting as a parking lot attendant, having yet to join up with the Hoboken-bred crew. According to Ira Kaplan (vocals and guitar, with Georgia Hubley on vocals and drums rounding out the modern trio), the record itself was mostly an excuse to screw around in the studio with YLT’s first lead guitarist, Dave Schramm. While Fakebook is primarily a compilation of covers, like its eventual offspring, the YLT (as “Condo Fucks”) record Fuckbook and 2006’s Yo La Tengo is Murdering the Classics, it also includes five originals. Setting aside their noisier proclivities and the rawer elements of their former work in favor of a more stripped-down, breezily folkish approach, the album was, in its time, a novel approach for the band. Today, more than 20 years on, Fakebook remains a testament to Yo La Tengo’s versatility and early promise, as well as being the first full glimpse into the group’s almost frightfully encyclopedic familiarity with what must be hundreds of radio hits and older cuts. 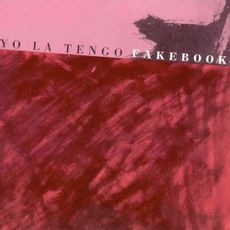