Thalassing' is a self titled LP by duo Michael Tanner and Kerrie Robinson.

Michael has made music under many guises Plinth, Cloisters and The A.Lords to name but a few as well as recording and playing live with Mark Fry and Sharron Kraus. As Plinth he created 'Music for Smalls Lighthouse' also released on Clay Pipe Music. Kerrie J Robinson is a multiinstrumentalist based in the remote west Highlands of Scotland. Originally from Dorset, she cut her musical teeth working in record shops and playing in bands, including Red Peal, Betika, and Sancho. Her current solo work fuses field recordings with improvisation, sound design and electronics. Thalassing was recorded live in one night alongside a screening of Robert J. Flaherty's 'Man Of Aran' (1934). 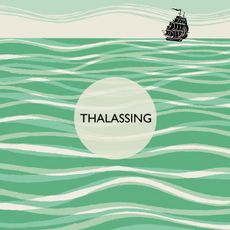