"A heady balm of smeared guitar textures and sharp pop sensibilities" Stereogum "Melbourne's Flyying Colours are back and are sounding bigger than ever" The Line of Best Fit "Ref: points include the mighty Swervedriver, while the sighing introspection is worthy of The Pains of Being Pure at Heart" Clash "Fuzzy goodness" Wonderland Australian four-piece Flyying Colours are set to release their sophomore album; taking inspiration from the early 90s UK psych/shoegaze scene, 'Fantasy Country' is rich in sonic texture and shimmering atmospherics with a heavy dose of melody.

From the swooning, sludgy 'Goodtimes' and urgent noise-fest of 'Big Mess', to the gorgeous melodic pop of 'OK', Flyying Colours look to redefine noise within the context of pop music. Elsewhere, 'It's Real' is perfect, summery dreampop while the crushingly loud 'White Knuckles' and chugging 'Boarding Pass' is a hazy, echo-laden spaced-out affair. Having released their critically acclaimed debut album 'Mindfullness' in 2016, Flyying Colours have spent much of their time on the road with headline shows across the UK and Europe. "This album was supposed to now be 6-12 months old. We take touring and supporting our music live pretty seriously so it would have been very difficult for us to put out this album during the early stages of the pandemic. We are very lucky to be in Australia right now where shows are starting up again, and we of course hope to be touring internationally again soon," says Brümmer. 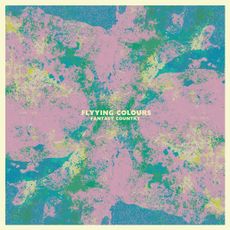