Polytechnic Youth return to the fray following 2 fabulous, quickly sold out full lengths from Polypores and Home Current- both of which attained “album of the week” status with a number of shops.

This time round it’s back to the label’s preferred format- the 45. Two killer 7”’s nicely wrapped up in the label’s new BBC 70s inspired tracing paper label bags. First up is the curiously named MASONIC KITCHEN. The solo project of Chris Walker, whose inspiration came when he found an obscure 1970’s sc-fi novel in his local bookshop’s bargain pile. It’s intriguing cover (with Asimov font) and story’s themes “despite being quite dated, inspired 4 tunes that easily have been conceived in the late ‘70s or early ‘80s.” PY lifted 2 of these tracks for the 7” here and both are just fabulous; ticking all the minimal synth boxes- sequencers, drum machines etc etc. the A side is a particular banger and is already incredibly well received after initial listens to it’s teaser clip online… (link below) B side “T-City Scavenger” is also right up there, another killer track. The single is expected to sell out super quick and comes hugely recommended to fans of the early Cabs, Chris & Cosey, early Human League, DAF, Fad Gadget etc….. 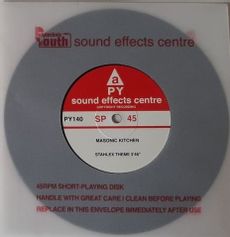