ATOMHENGE, the home of HAWKWIND’s catalogue from 1976 – 1997, continue their series of definitive reissued editions of these classic albums with the release of “PALACE SPRINGS”.

The album, originally released in 1991 by GWR Records, was the final Hawkwind release to feature both Bridget Wishart and Harvey Bainbridge in the band, alongside a line-up of DAVE BROCK, ALAN DAVEY and RICHARD CHADWICK. Actually recorded in 1989 and 1990, the album comprised studio recordings that also featured SIMON HOUSE on Violin and live recordings made at the Palace Theatre in Los Angeles. Featuring fine renditions of classics such as ‘Time We Left (This World Today)’, ‘Damnation Alley’, ‘Lives of Great Men’” (also known as ‘Assault and Battery’) along with the excellent ‘Treadmill’, the album remains a fondly regarded Hawkwind album. This Deluxe Atomhenge edition has been re-mastered from the original master tapes and adds two previously unreleased tracks from the 1989 recording sessions (‘The Damage of Life’ and a studio medley version of ‘Treadmill’ / ‘Time We Left (This World Today)’ on disc one, whilst disc two features the band’s concert at the Omni in Oakland, California in December 1990. Features a booklet with an informative essay, photographs and restored artwork. 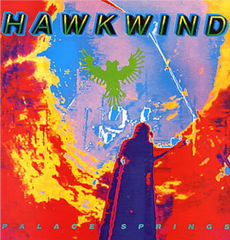