Anohni has shared an emotive cover of Gloria Gaynor’s 1978 classic ‘I WIll Survive’.

The track was a staple of her early live shows and opens with a graceful string arrangement by Maxim Moston, paired with piano performed by Anohni. Prior to the track being widely available on streaming platforms, Anohni shared a video incorporating live footage alongside messages dedicated to groups and causes that Anohni has long been an activist and advocate for. During the clip, Anohni dedicates the song to “the sacred gay people’; “all endangered Black trans lives”; “those in the US who die from medical neglect”; “the coral reefs of the world, now rotting”; “all those awaiting execution in US death chambers”; “Black lives tortured and stolen by American cops” and more. The messages reflect Anohni’s longer values and work as an artist, trans activist, environmentalist and advocate for social justice. Alongside the release is a statement from Anohni, on the track being the subject of a licensing offer she turned down due to the platform in question hosting misleading pro-Trump ads. Further on the track, Anohni explains: “It was the first song I ever sang in nightclubs in NYC when I was 20 years old. I sang it hundreds of times. In those days I sang it thinking of Marsha P. Johnson and the underground queer community struggling to survive in the face of AIDS. Now it seems to me like an anthem for the future of life on earth.” ‘I Will Survive’ follows a brace of releases from Anohni this year: mostrecently ‘R.N.C 2020’, a track inspired by the Republican National Convention which took place in August and the dread Anohni felt while watching it.

Yaron says "With a creative flair, in true Anthony form, this 7" takes you to heaven on one side and darkness on the flip. A somewhat unconventional pairing at first glance, a listen through sides A and B back to back, showcases both the Anthony many have grown to admire, as well as the carefully crafted dark prowess of the ANONHI project. Pure class!" 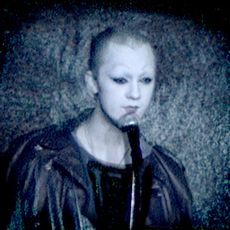