Being a jack of trades has enabled Teyana Taylor to become a master of all.

From her smoky melodic vocals to her dynamic dance moves, the R&B superstar entertainer dips ’n dives between her talents as singer, songwriter, producer, director, dancer/choreographer, actor, fitness guru, model, and mother. When it comes to describing herself, the Harlem native can only think of one word: Everything. In 2014, Teyana’s love for the arts and R&B earned her the title of the first woman signed to Kanye West’s G.O.O.D. Music imprint. THE ALBUM, released June 19 2020, was tapped by Pitchfork as one of the “most anticipat¬ed albums of the summer.” In addition to "Wake Up Love," Teyana’s masterpiece included her new graduation anthem "Made It," pegged by NPR as a “a triumphant, isolation-proof anthem for the Class of 2020.” In August, it was announced that "Made It" was picked by President Barack Obama as one of the tracks on his 2020 Summer Playlist. Debuted at #1 on the Billboard R&B Charts, the album has spawned a number of standout creative moments, from her self directed video for “Lose Each Other” featuring Elton John. Following the release of her album, Taylor was awarded Video Director of the Year at the 2020 BET Awards. 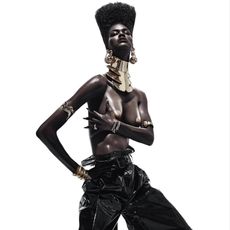