Anna Calvi will release a 10-year Anniversary edition of her self-titled debut album via Domino.

An astonishingly confident record; ‘Anna Calvi’ showcases the unique strengths of her songwriting, singing and virtuoso guitar-playing, all jumping out of the speaker together. Calvi drew on the ghosts of Nina Simone and Maria Callas for influence to create a stunningly modern sound. To date, Anna Calvi has released three studio albums (‘Anna Calvi’, ‘One Breath’ and ‘Hunter’), a collaborative EP with David Byrne (‘Strange Weather’) and the most recent ‘Hunted’, a seven-track reworking of ‘Hunter’. Additionally, Calvi wrote and performed the score for Season 5 of BBC One’s Peaky Blinders and wrote the music for the opera The Sandman, directed by Robert Wilson. Anna is the first solo artist to achieve three consecutive Mercury Prize nominations and has also received a Brit Award nomination. Throughout her career, Calvi has worked with Brian Eno, Marianne Faithfull, Charlotte Gainsbourg, Joe Talbot (IDLES), Dave Okumu (The Invisible), Johnny Flynn, Adrian Utley (Portishead) and Courtney Barnett. The LP, which includes the likes of ‘Desire’, ‘Blackout’, ‘Rider To The Sea’ and ‘Suzanne And I’, is reissued for the first time, available to independent retailers on deluxe red vinyl. It also features brand new cover artwork and an 8-page booklet containing previously unseen photographs, plus digital download code. 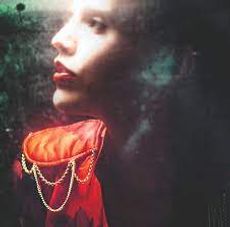