THE WORLDS NOT BIG ENOUGH (2021 reissue)


his album was recorded in 1977 and produced by Status Quo’s FRANCIS ROSSI.

Shockingly, this album has never been released on vinyl until now. It originally came out on CD in 1992 and is now long out of print and even that goes for good coin. Du Cann’s stellar career included freakbeat heroes THE ATTACK (“Magic In The Air”), psych/prog legends ANDROMEDA, and the group he’s best known for, ATOMIC ROOSTER. Du Cann wrote their their #4 hit single “Devil’s Answer”. A couple of years later he was in DAEMON, later renamed BULLET, then HARD STUFF. In 1974 he was even a temporary guitarist for a THIN LIZZY German tour. In 1977, he was signed to the same management company as STATUS QUO, who paired him with Quo leader, Francis Rossi. The resulting album, “The World’s Not Big Enough” included Rossi on guitar, Andy Bown (The Herd, Judas Jump, Status Quo) on keyboards, Pete Kircher (Honeybus, Status Quo, Liverpool Express) on drums, and John McCoy (Ian Gillian, Tyla Gang, U.K. Subs) on bass. Basically, this is Du Cann backed by Status Quo at their Belt Buckle Boogie peak. A few songs from this album appeared on killer late 70s Punxploitation singles “Throw Him Jail”, “Don’t Be A Dummy” (a UK Top 40 hit!), and “Where’s The Show”. This album has been described as “Quo mixed with the Sex Pistols”, and we can’t disagree with that assessment. 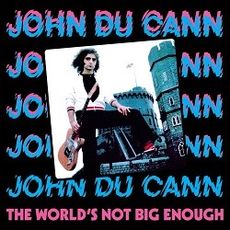