Meandering between neo-soul, hip-hop and jazz ‘Moonlit Train’ is a conceptual record that journeys through relationships, heartache, and healing. Produced by collaborator and multi-instrumentalist Jack-Chi aka Jack Kingslake -a Bristolveteran who cut his teeth as a producer in the city - the album sets the stage for a new chapter in Tiawa’s career on hometown label Tru Thoughts. Fusing soulful vocals with the jagged edge of a rap-styled flow, Tiawa lays the foundation for her timeless yet graceful sound and lyrical maturity that confutes her youth. Themes of healing are at the core of Tiawa’s creative output, while simultaneously exploring her Portuguese heritage. In the artists’ words: “Each song on the album is an emotion. I hope it helps to heal people in serious situations and make them feel better when they listen. “Saudade” is the introduction to ‘Moonlit Train’ and opens with a Portuguese poem that translates to ‘don’t be sad now, I’m going to play a song for you.” Described by the artsdesk as “pure trip-hop”, Tiawa has been championed by the likes of legendary DJ David Rodigan (BBC Radio 1Xtra), broadcaster royalty Cerys Matthews (BBC 6Music), and underground purveyors Off Licence Magazine.’ - Previous support Youth (Killing Joke), David Rodigan (BBC 1Xtra), Cerys Matthews (BBC 6Music), Off License Magazine. - Featured on WheelUP’s single “Take Me Higher” and the album “Good Love”. 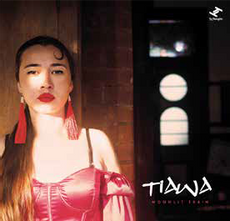